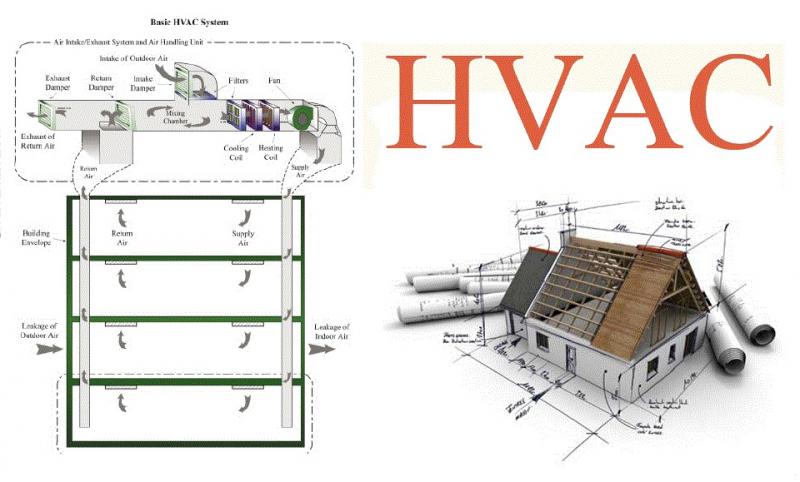 HVAC (stands for Heating, Ventilation and Air Conditioning) equipment needs a control system to regulate the operation of a heating and/or air conditioning system. Usually a sensing device is used to compare the actual state (e.g. temperature) with a target state. Then the control system draws a conclusion what action has to be taken (e.g. start the blower).

The application of Heating, Ventilating, and Air-Conditioning (HVAC) controls starts with an understanding of the building and the use of the spaces to be conditioned and controlled. All control systems operate in accordance with few basic principles but before we discuss these, let’s address few fundamentals of the HVAC system first.

The capacity of the HVAC system is typically designed for extreme conditions. Most operation is part load/off design as variables such as solar loads, occupancy, ambient temperatures, equipment & lighting loads etc. keep on changing throughout the day. Deviation from design shall result in drastic swings or imbalance since design capacity is greater than the actual load in most operating scenarios. Without control system, the system will become unstable and HVAC would overheat or overcool spaces.

HVAC systems are classified as either self-contained unit packages or as central systems. Unit package describes a single unit that converts a primary energy source (electricity or gas) and provides final heating and cooling to the space to be conditioned. Examples of self-contained unit packages are rooftop HVAC systems, air conditioning units for rooms, and air-to-air heat pumps. With central systems, the primary conversion from fuel such as gas or electricity takes place in a central location, with some form of thermal energy distributed throughout the building or facility. Central systems are a combination of central supply subsystem and multiple end use subsystems.

There are many variations of combined central supply and end use zone systems. The most frequently used combination is central hot and chilled water distributed to multiple fan systems.

The typical uses of central systems are in larger, multi-storeyed buildings where access to outside air is more restricted. Typically central systems have lower operating costs but have a complex control sequence.

Where are HVAC controls required?

The HVAC control system is typically distributed across three areas:

Benefits of a control system:

Controls are required for one or more of the following reasons:

In simplest term, the control is defined as the starting, stopping or regulation of heating, ventilating, and air conditioning system. Controlling an HVAC system involves three distinct steps:

The above three functions are met through sensor, controller and the controlled device.

Elements of a control system:

HVAC control system, from the simplest room thermostat to the most complicated computerized control, has four basic elements: sensor, controller, controlled device and source of energy.

Figure below illustrates a basic control loop for room heating. In this example the thermostat assembly contains both the sensor and the controller.

The purpose of this control loop is to maintain the controlled variable (room air temperature) to some desired value, called a setpoint. Heat energy necessary to accomplish the heating is provided by the radiator and the controlled device is the 2-way motorized or solenoid valve, which controls the flow of hot water to the radiator.